I'm a new member here. I have a Craftsman riding mower that I converted into remote controlled. Everything works fine, and this is how I'm cutting my grass now. But as you can see, I have the mower engine at its usual place, but I like to lower it as much as possible so I can go under low hanging tree branches.

This is my remote controlled riding mower: 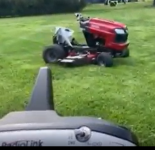 I'm guessing the fuel is gravity fed on this mower? Because the fuel tank is sitting higher than the motor.
So I'm assuming I need a fuel pump or something to keep fuel flowing.
I know very little about engines.

Even the US military occasionally loses remote devices when something interferes with the signal. Hope you have some kind of automatic cut off using a TTL so it doesn't get away and hurt someone.

Yes of course I have automatic cut off, I've been mowing like this for the 1 year now.
Any idea how to lower the mower engine on the chasis?

I know I could put it an electric motor and it will be simpler, but I would prefer to have the engine gas since then I don't need to worry about getting additional batteries, relays etc.
B

@bertsmobile1 , thank you for the reply. I guess I'm not sure about the fuel tank location and whether I need to get a fuel pump?
Because right now it looks like its gravity fed since the fuel tank is sitting higher.
B

With the exception of the side valve B & S Sprint series engines, all walk behinds were gravity feed .
From memory there was also an electric start variant but I am not that well versed in US push mower engines as till 1996 Victa had over 70% of our local market , the other makers either used Honda engines or Tecumseh engines , we exported mowers and imported almost no US made mowers.
The power torque engine has the lowest profile of any mower engine ever made but you were not allowed to buy them in the USA, but they were sold in Canada for a couple of years before the US government forced Canada to stop importing them as well so you might find a Power Torque in Canada 2nd hand .
The next lowest I can think of would have been the B & S Sprint engine with the side pull starter .
It all depends upon how much machining you want to do .
Victa put the flywheel under the mower deck then sunk the pull start mechanism inside the crankcase as Ryobi do with their cheaper line trimmers so the Power Torque engine is near 6" lower than any 4 stroke engine and the heigh determinant on them was the grass catcher.
But building a new 4 stroke engine with an overhung crank , underslung flywheel and side mounted carb with fuel pump will keep you in the shed for more than a couple of nights .
Some of the locals to you could probably rattle off a dozen B & S model numbers for the side pull side tank engines but I would have to go searching through the bone yard for way too long .